Why has Pakistan not achieved a single Millennium Development Goal (MDG)? 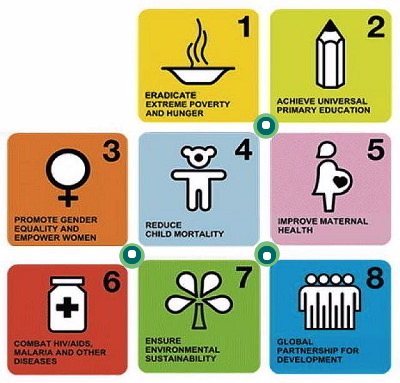 The experts have raised the questions on the stability of current economic systems; Professor Jay Forrester at MIT presented his model which stated that with no major change in technology, economic and social relationship, natural resources will be depleted in the next 100 years. Moreover, he also pointed out towards the limitation of technology to solve the problems. On the other hand, Julian Simon described her model based on the resourcefulness of human which is able to overcome both the resources scarcity and environmental problems. In short, the optimistic model was based on the ability of technology to solve the problems while the pessimistic model was based on the limitation of technology to cause the other problems. To cope with the situation, a new model of sustainable development was developed which was aimed to meet the needs of the present without compromising the ability of future generations to meet their own needs. Sustainable development covers all the issues related to economic, environmental and social aspects.

Pakistan adopted the SDGs on 27th of September and it was the first country to adopt them through a unanimous resolution of the parliament. The government has established SDG support units at provincial and federal level as well as an SDG secretariat within the parliament. Main emphasis was given to a strong coordination among the departments, public awareness, inclusive participation and reduction of the data gaps. Furthermore, Pakistan has also kicked off its Vision 2025 which is aimed to enable the country for joining the League of Upper Middle-Income Countries by 2025 and then Top Ten Economics of the world by 2047. Vision 2025 which is consisting of 5 key enablers and seven pillars with 25 goals was also totally aligned with SDGs. In addition to it, Pakistan is also a part of China’s grand vision of its Road and Belt Initiative (RBI) through Pakistan Economic Corridor (CPEC), and RBI has also been considered as the first regional attempt towards attaining the SDGs.

However, despite the numerous steps taken by the government of Pakistan and availability of opportunities for the country, it is worth to mention that on SDGs Index Pakistan stands at 115th position out of 149 countries in the world by securing a value of only 45.7. Hence a lot of more is recommended to attain targeted results. The aim could be achieved only with proper research and development and formulation of the strategic policies by considering their environmental, social and economic consequences at the most initial stages with help of modern techniques and tools like Strategic Environmental Assessment (SEA), and the most important Life Cycle Assessment (LCA) which covers all the three aspects of sustainability assessment i.e. environmental, social and economic. To achieve the goal of a sustainable Pakistan, a strong coordination among policy makers from the government and organisations, researchers from the academia and industry as well as a firm commitment by the government and people of Pakistan is needed, so that we can achieve the Quaid’s dream of a prosperous country with justice, equality and responsibility.

About the author: Hafiz Usman Ghani is a candidate for Masters in Environment Engineering at JGSEE KMUTT, Thailand. He is working on sustainability assessment, sustainable development, and life cycle impact assessment etc.