The 'Selfie Disorder' and Social Media 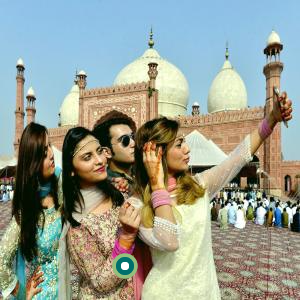 A couple of years back, a news story began circulating on electronic and social media claiming that the American Psychiatric Association had classified excessive selfie taking as a psychological disorder, calling it 'Selfitis.' The widely shared story later turned out to be a hoax, with the APA denying the classification of any such disorder. However, it did play a significant role in catalysing the debate concerning the relationship between selfie taking and narcissism.

We are so vain that we even care for the opinion of those we don't care for. - Jane Austen

Now psychological research is indicating that a correlation between selfies and narcissism does actually exist. One such study was carried out on a sample consisting only of men, while another one included both men and women. Both studies indicate that narcissism and selfie taking are indeed correlated, and while the correlation is small, it is still statistically significant.

That is, of course, not to say that all people who take selfies are narcissists - not in the actual psychological sense of the term anyway - but it cannot be denied either that this whole social media plus selfie scenario is causing us to become more self centred than ever before. For the first time in history, everyone is in the limelight, nobody's life is private anymore, all thanks to social media. Add this social media craze to the selfie craze, and you have the perfect recipe for self obsession, ego-centrism and narcissism.

Selfitis may not be an actual disorder, but psychiatrists have been voicing their concerns about excessive use of social media and selfies and warning about its effects on mental health for quite some time now, in fact, ever since the term selfie was coined in 2013. According to British psychiatrist Dr David Veal: "Two out of three of all the patients who come to see me with Body Dysmorphic Disorder since the rise of camera phones have a compulsion to repeatedly take selfies." A classic case of such obsessive compulsive behaviour was British teenager Danny Bowman who became so obsessed with taking selfies that he started taking 200 selfies a day, did not leave his house for six months. failing in his attempt to take the "perfect selfie" he attempted to commit suicide, but fortunately survived.

The shallow mindedness and superficiality instilled by this selfie and social media obsession is clearly evident in people's reactions to other people's shared material on social media . A well researched and well written piece of information will never be able to catch the attention of more than a handful of people, but a selfie will get you some 80 likes and 35 comments from all sorts of people in your friends' list, including your second cousin's mother in law, your paternal aunt's daughter in law's mom, and that former classmate, who was never really a close friend, whom you very recently added to your friends' list on facebook.

Social media bestows a false sense of self worth, and a compelling desire to expose extremely personal and private affairs to semi strangers and unknown people, preferably in the form of selfies. hence we have a triad consisting of social media, selfie obsession and narcissism - where each one feeds off and gives rise to the other - ultimately evolving into a vicious, never ending cycle.

Over the past decade or so, we have been under the illusion that we are now more in touch with our nearest relations, but in truth social networking sites have actually caused us to grow more distant, leading to a weakening of relationships with those who actually matter. Moreover, over time social media has created within us a general disregard for privacy and decency, what ought and ought not to be shared with the world. Most importantly, our self esteem now appears to be completely dependent on social media: the more likes we receive, the higher our self esteem and vice versa.

As we become more and more addicted to social media, we grow increasingly obsessed with all that is superficial and skin deep. After all, what is social media but a depiction of the superficial and often unreal aspects of people's lives and personalities. it is a world where physical appearance is of the utmost importance, where people know you through your photo-shopped selfies or the few carefully chosen words and edited statuses that you share with them.

Modern society has never laid greater emphasis on physical appearance, than it is doing now, which is what's causing teenagers like Danny Bowman to suffer from conditions like Body Dysmorphic Disorder. What's more is that this ugly trend, which we considered to be a hallmark of western societies, has slowly crept into our so called "Muslim" societies, and is likewise proving highly detrimental for our youth.

The Quran explicitly tells us:

Surely the noblest amongst you in Allah"s sight is one who is most pious of you. (49:13)

This verse and others like it repeatedly emphasise the nobler traits in human beings, and aim to warn against vanity and conceit based on such superficial traits as physical appearance. According to Christian beliefs, Vanity is one of the seven deadly sins. The reason quite obviously being that it morally retards the soul and deviates it from its true goal, which is to serve humanity, not become a burden for it. If we manage to "get over" ourselves, will we be able to witness the suffering around us. Instead of indulging our whims, we might then be able to indulge the humanity within us. Instead of sharing a meaningless selfie, we might try sharing the picture of the eight year old child who is being forced to work in a mine in Congo. Instead of feeding our vanity, we might try to feed our souls.