Rain Makes Karachi the Worst City to Live In 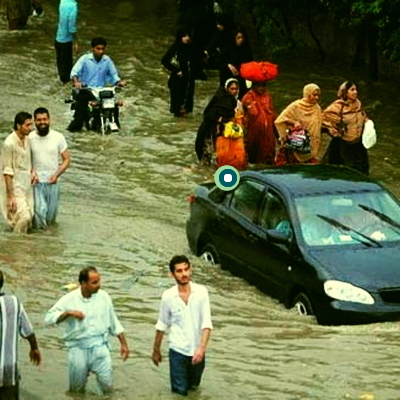 Rain is considered abr-e-rehmat in Karachi since it happens quite rarely. People wait patiently for the arrival of monsoon season to enjoy the rainy weather. With rain comes its delights; pakoras, samosas and other savories.

Unfortunately, here, in Karachi, the abr-e-rehmat turns into disaster for the citizens due to the negligence on part of Government. The recent spell of rain, which is anticipated to last for a day or two, has changed the City of Lights into City of Flood.

31st of August, I woke up with rain pouring heavily. For me, it was a sight of ecstasy until I sat in front of the television. Then onwards, I realized the misery, agony, suffering it caused to my people.

So, what’s the update? 13 people dead. Isn’t it enough for the Government to come into action? No. Human life isn’t worth it? Regrettably, I have to say ‘no’. What’s more? Government is not competent enough to support the citizens. Instead, Government seeks help from Pakistan Army. Salute to the jawans! As always, they are here to help their people.

Why does the Government exist then? For corruption? After any such disaster, what is the job of Government and Opposition? Nothing. The blame game starts. Shining politics on behalf of the lives of common people.

After the havoc that rain caused, no one can believe it’s the same Karachi we saw yesterday. Water gushing down the roads, underpasses resembling swimming pools. Even people are not safe at homes as at many places, water has entered in homes.

Two days left in Eid-ul-Azha. I came across a news of 5 animals dying due to electrocution. What else is left for hearing? Life in the Mega City has come to a halt. The situation is getting worse day by day. Karachi has been ranked among the worst cities of the world to live in.

Anything left for the Government to achieve?

The city was already filled with garbage, waste and trash. The inattention to the problems of Karachi has caused severe inconvenience for the citizens after rain. If the rain continues, only Allah knows better where the people of Karachi will go.

Nobody owns Karachi when it comes to addressing its problems. Everyone comes forward when they need support for winning the elections.

Rain is truly abr-e-rehmat only if the Government fulfills its responsibilities.

The way I see it, if you want the rainbow, you gotta put up with the rain - Dolly Parton