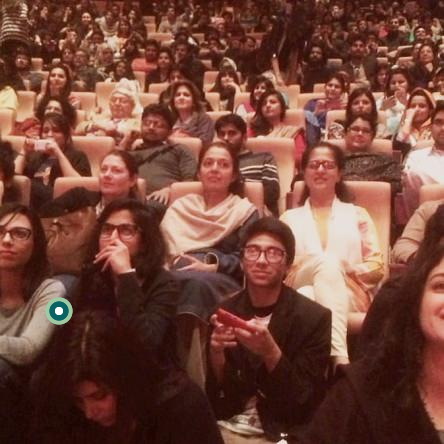 “What did you just say? You are going to watch theatre, that too with your teenage brother? Are you even alright?”

“What’s wrong with theatre mama? Plus its Islamabad, I am pretty sure it’s going to be fun and since its Islamabad it would be kind of safe too, timings suit us as well. Won’t be late”

“It’s not about being safe, it’s the content and the image of theatre, do you have any idea how it is perceived on our end? Plus who on earth has even recommended you this?”

“A friend of mine I have told you in detail already mama, plus what’s wrong with theatre I still don’t get it”

“I am in no mood of discussion, you people are not going there and that’s it.”

This was the actual conversation, I had with my parents, took me 2 weeks to convince them to allow me to go there along with my younger siblings. Mama wasn’t actually sure of granting the permission till the very last minute, but probably the fact that I am the child who always gets a “YES” from parents got this one too, after being tossed from mom to dad to mom number of times.

These 2 weeks actually made me wonder what is it that’s so erroneous about theatre in Pakistan that it is looked down as something wrong, especially the fact that both of my parents kept on emphasising n the fact that not only theatre but its audience too is perceived in an unusual manner made me ponder hard, and a lot more keen in experiencing it.

“Aapka Matlooba Number Dusri Line Pe Masroof Hai” by All4One production, is the play I went to watch with my younger siblings and a close friend on Tuesday May 8 at Aiwan E Quaid- Islamabad. With a never ending flow of thoughts, so many questions in mind, I seated, looking at the nicely put set design, roughly going through the play brief-already on the seat, anxiously awaiting the play to start.

Black Out! Followed by cheeky noises by the audience and suddenly it was the co-writer on stage in yellow spot light, introducing the play, the sponsors, and giving a brief review of the whole idea behind theatre. And there it was, the scene one. From the 3rd minute of the play till the last I couldn’t stop laughing and to an extent relating myself to a number of thing being said an showed there. The relatively small hall with a less heightened stage was beautifully used; the cast was just perfect, the lighting, and the dressing everything was on point.

Here suddenly the thought once again ran through my brain, “its not the safety, it is the content of theatre that I am bothered about” a thing that my parents had said numerous times, but there was absolutely nothing wrong with the content, it was a beautifully scripted play relating to every other youngsters life these days. The screenplay, the dialogues were immensely well put, not a single word that went off board. Secondly the whole idea of theatre that is presumed bawdy was literally showed off from my mind, as the audience was brilliant, thoroughly civilised, the play, the management in short the whole event was in simple words organised to the best for individuals of all groups. All that you needed there was a sight to actually see it.

Honestly! The 1 hour 55 mins were not only well spent, but were totally worth it. I returned home called my people and told them exactly what I am about to say; If this is theatre, there should be more of it, more regularly. They used raw talent, local talent and put up a brilliant show, hats off to the cast and directors, it was well managed, well done crew, far better scripted from most of the stand-up comedy shows being telecast daily on national television channels-that do use all sorts of language to try make people laugh and on the same time be sarcastic towards who so ever they want to, extremely well done writers.

Let’s try and understand that if there is some content or certain movies that are not appropriate, doesn’t mean that the whole cinema is bad, similar goes for theatre, if what witnessed is the comeback of theatre in Pakistan after years of being really down then we need to support theatre, visit plays, support the local talent, and simultaneously not only clear the misconceptions but encrypt the actual image of theatre on each other’s minds. YES! I was there in the audience, and I will make sure to not miss any other opportunity of being there.