My Defence of Misbah's Pushups for the Army 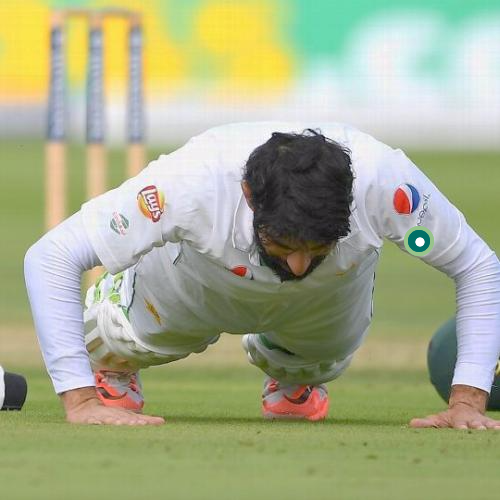 In this troubled world, there are fewer moments of joy left for public. Sports are always considered a healthy activity and teams dominating sports become source of lifting their people. After decline of many sports in Pakistan, cricket now remains as sole source of entertainment which is followed from all segments of our society. Dipped with premium performance; when our cricketers smile, we all smile with them. We have often seen our cricketers doing Sajda after achieving centuries,5 wickets hauls and victories. We all got electrified when Waqar Younis used to celebrate clean bowled in his own roaring way. We all got that bird’s feeling while Shoaib Akhtar celebrated his wickets spreading both arms like a bird. Shahid Afridi’s own style of standing with raised open arms became very popular all over the world.

When Misbah-ul-haq celebrated his ton in a unique style by saluting and doing pushups thereafter; we felt a strange delight. "Hey you all out there; look I am still young at the age of 42, I am not exhausted at 100 runs and I want much more" this was a first impression that many got until he further explained it later in the day.

Misbah said that his hundred was dedicated to the instructors at an army boot camp in Abbottabad where his team spent two weeks training before flying to England.“That was my promise to the army guys when we did our training camp,” he said. “We used to have an honour code where we were told to step into the ground and do ten pushups. I promised them whenever I got hundred I would do that to remind them (Army) we were there. That was for them and the salute was for the (Pakistan) flag. That was what they asked us to do so I did it for them.”

After winning the first test at Lords, whole Pakistani team got lined up in the ground and celebrated their victory with 5 pushups which was cheered all over the world. Captain further explained this at the post match press conference "They(our team) sent this small tribute to all those army men who were working really hard with us at the boot camp so it’s a good message and one thing that we learned from them; those army people they are not getting much salaries but for this flag, for Pakistani nation, for Pakistan they want to sacrifice their lives so that's a big motivation for all of us and I think everybody is now putting effort for that flag and nation and really try give their 100% and try to win all the games"

This further jubilation the nation who felt more proud and connected with armed forces who showed their metal turning over a losing squad into winning; very much evident from the social media posts/speech during that time. Lovely moments of team Pakistan doing celebratory pushups; everybody was so happy, emotions of nation just cannot be explained in words. I myself replayed those pushups many times to pump myself!

Until last week when the National Assembly standing committee objected to press-ups performed by the Pakistan team players after victory and even asked ‘whom did the players were giving message with those push-ups.” Rana Muhammad Afzal of the NA committee raised quite an unusual objection, saying players did push-ups after the triumph and remained silent after the defeat. “What’s actually the matter,” he asked.

Above statements raised anger among the public as these were such meaningless questions; Misbah had already explained the story behind all that. Social media trolled the government in their own style and we saw their mockery all over the place”

People reacted in many ways as:

Misbah bravely reacted and said players can still celebrate in whatever manner they want. "It was simple and there was no controversy in our minds," he said. "It's (up to) everyone's discretion, but we know there is no negative thing in our minds.

Whether it was directly ordered from somewhere OR the minister tried to become 'Shah se ziada Shah ka wafadar' the whole episode just bring another chapter of disgrace to the government. Mr. Nawaz Sharif should keep a close check on such people. There are so lean chances of happiness left in our lives, why do you want to steal them too? Why are you so insecure? Doing #pushups does not mean anybody is trying to sack Jamhooriyat and bring dictatorship. We want to see them play and raise the flag, we want to dance with them; please do not kill our inner child, please!!!

I hope that team Pakistan will continue to win more, cheer up the grounds much more and such useless objections will do nothing but glorify the Green boys and their #pushups!