Blasphemy Law - An Excuse for Our Paranoid Insecurity & Hatred for Minorities 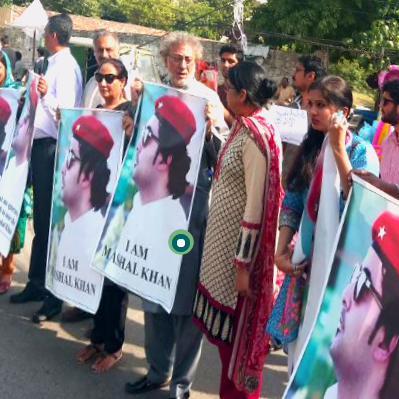 On 13th April, an unspeakable crime was committed in a prominent educational institute of the country. 23 old Mashal Khan, a journalism student at Abdul Wali Khan University of Mardan, was brutally murdered by a mob of homo sapiens, or what looked like humans, but may have belonged to some other species. His alleged crime? Blasphemy against the Holy Prophet (SAW).

And when it is said to them, "Do not cause corruption on the earth," they say, "We are but reformers." Unquestionably, it is they who are the corrupters, but they perceive [it] not. (2:11-12)

This cold blooded slaughter of a student by members of the educated class, including teachers has raised some very serious concerns about our collective mindset, and has highlighted the alarming levels of moral decadence, pathology and paranoia within our society. Moreover, it compels the sane and the rational minded to ask some serious questions, like, for instance, what in God's name is blasphemy, anyway? How do you define it? Should there be a death penalty for it, or any penalty at all? Has the Quran decreed or even mentioned such a penalty?

Blasphemy is a term that has multiple and extensive definitions in a society like ours. The list of blasphemers is endless. For instance, Allama Iqbal was deemed a blasphemer and kafir by the Muslim ulema after his famous, or rather infamous SHIKWA. Quaid e Azam Muhammad Ali Jinnah was continuously classified as kafir by most of the local Muslim scholars of his time, and was considered a man unfit to lead the Muslim nation out of the abyss due to the fact that he appeared too modern and liberal. In fact, Maulana Shabbir Ahmad Usmani was most particularly inquired by his contemporaries why he complied to lead Quaid e Azam's funeral prayers!

Even I, at this very moment, am committing blasphemy simply by questioning the legitimacy of the Blasphemy law. That's how it is. Speaking against a man made law can get you in serious trouble in my society. That is exactly what killed Salman Taseer, as he dared to speak against a law which is implemented in our country in such a way that it serves to victimise the weak and to strengthen the hands of the powerful elite. The influential ulema or clergy of my country would have me follow them blindly, a practice known as Taqlid in Islamic Jurisprudence, as opposed to Ijtihad, or reinterpretation through intellectual effort. These Islamic clerics expect to be followed blindly without question, discouraging any use of personal intellect in an endeavour to understand the true meaning of the Quran.

It is due to this curse of Taqlid that Muslim thought has remained stagnant for the past five centuries or so - despite the fact that the spirit of Islam was inquisitive from the very beginning - a problem Iqbal addressed extensively in his Reconstruction of Religious Thought in Islam, especially in the 6th lecture of the book.

Coming back to the Blasphemy law, which is the article 295 C of our constitution; I think this law and the excessive defensiveness connected to it is the result of a deep rooted sense of insecurity related to faith. This insecurity originated within the Indian Muslim Nation following the British colonisation of India, whereby Muslims, once rulers and masters, were reduced to third class citizens of the same country. At such a time of foreign occupation, it is understandable for a people to harbour sentiments of jealous overprotectiveness for their faith (https://fatimaaltaf.wordpress.com/2016/03/13/ghazi-ilm-ud-din-shaheed-and-mumtaz-qadri), but such insecurity and defensiveness can no longer be justified now that we have a country of our own, and are free to practice our faith, with no outer or foreign occupation or threats.

The Islamic Republic of Pakistan consists of 95% Muslims, most of them practising in some sense of the word. Yet, to the so called religious class of Pakistan, Islam is constantly under threat. To their deluded minds it appears that someone is ever ready to commit blasphemy against Islam or the Prophet of Islam in every street, every nook and corner of Pakistan, and so they are forever vigilant to cut off any head, hand or tongue which appears suspicious of even harbouring the mere thought of blasphemy. The person has to be killed first, we can investigate if he was guilty or not guilty later - much later.

All this mania continues while there is an existing law on blasphemy within the constitution of Pakistan. These so called Aashiqan e Rasool have no trust nor respect for the law of the state, even though the first thing the Prophet taught was discipline and respect for the law. Such people are actually the real fitna, the actual blasphemers who cause persecution and anarchy within the state, and they should be the ones to receive the highest penalty.

Most importantly, all this hatred, brutality and inhumanity continues to be carried out in the name of him (SAW) who was sent as a Mercy upon all Worlds, for the entire Humanity. Our selective interpretation of the Quran and Sunnah makes us un-heeding towards the actual message of love and peace brought by our Beloved (SAW). We do not acknowledge the verses which speak of tolerance and peace, for example, "There is no compulsion in religion," and "He who killed a human, killed the entire humanity." We don't remember how he, whom we claim to love beyond anything and everything, forgave his worst enemies. He forgave the woman who threw trash on him, the people who placed a camel's placenta on his neck while he was praying in the Kaaba, the people of Taif who threw stones at him until his shoes were filled with his own blood. Killing in his name who taught us the meaning of love, tolerance and patience?

The Muslims of my country and of the world need to understand that nothing and no one can tarnish the image of the man whom the West has been forced to acknowledge as the single most influential individual in the history of humankind. No insulting cartoons or absurd documentaries made by some morons will ever lessen the name, influence and glory of Muhammad (SAW), his followers will continue to increase in number. It is our own insecurity, inferiority complexes, lack of faith and insanity that compels us to commit horrendous crimes in his name.

If the Blasphemy Law is to exist at all, it must be amended and implemented in such a way that no innocent is ever targeted on mere suspicion, and whosoever places a false allegation against any other citizen of this country, should be the one to get the penalty. Moreover, the article 295 A of the Pakistan Penal Code, holds a penalty for hurting any citizen's religious sentiments, whether Muslim or non Muslim. Yet no Muslim has ever been charged for hurting a non Muslim's religious sentiments in Pakistan. According to Asia Bibi, the Christian woman Salman Taseer gave protection to, her fellow women ridiculed her faith first, which caused her to retaliate. The first and foremost responsibility of an Islamic state is the protection of its minorities, another lesson forgotten by our champions of Islam.