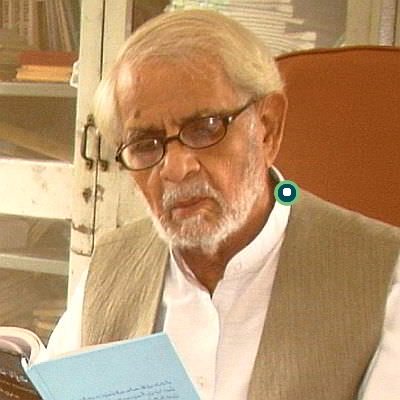 Writing a good book for children is not a child’s play. An exception is Masood Ahmed Barkati, who brought out a brilliant magazine for children spanning over a period of more than 65 years until he met his quietus on December 11, 2017. There is a dearth of children and teenage literature in Pakistan and someone with the calibre of Mr. Barkati, who created children literature for such a long time period without missing a single edition deserves much more than mere praise.

The mainstream children’s magazines can be counted on fingers including ' Taleem-o-tarbiyet ', ' Bachon ki dunya ', ' Khilauna ' and ' Bhai jaan ' and ‘Naunehal’. It is simply noteworthy deed of its own kind that he himself has become a part of history while attempting to revamp the society and history through his writings. He inspired my generation and many like me with the amazing strokes of their own style in those juvenile years that are considered formative in one’s life.

Mr. Barkati got his inspiration from Hakim Mohammad Said, the driving force behind “Hamdard Naunehal” who conceived the idea and offered him the post in 1953 and then he never looked back. He quite humbly always dedicated his success to Hakim Said and Saadia Rashid, Hakim Sahib's daughter who became patron in chief of Hamdard after his father’s tragic demise in 1998. He wrote more than 20 books and edited innumerable.

Children's literature includes poems, magazines, stories and books that are enjoyed by children and is classified by genre or by the intended age of the reader. Even before the era of publishing, children's literature can be traced to centuries old stories and regional songs as a part of wider oral tradition shared heart to heart by adults with children.

Many classic children's tales were originally crafted for adults and later adapted for a younger audience even after widespread use of printing press. A large quantity of literature blended with a moral or religious message, has been aimed specifically at children since the 15th century. Many books considered today as classics were published in the late 19th and early 20th centuries making this as the "Golden Age of Children's Literature". With the advent of modern electronic gadgets, children’s literature has become even more personified and crossed all traditional boundaries.

The early years of life are most important in child’s crucial individual character building. Child’s unconscious mind is affected by the ideas behind a story, thus shaping their perception and guiding their development. Books harbour the ideology of the culture these come from. It is widely recognised that author’s ethnicity, gender and social class influence their work. Because of their instructional nature, books are generally not neutral and by using the language of book, children are planted with the values of that society. Childhood can be considered as a culturally constructed concept.

A child learns how to behave and to act as a child according to the expectations of his or her culture through children’s literature. If judged on moral grounds, the craftsmanship of Mr. Barkati has enlightened and mentally fostered generations of our children. Many of those who read him have become successful individuals belonging to all spheres of life. He not only made generations of children read constructive, healthy, informative and educational material through his magazine but he has made and nurtured many notable writers of current era.

In recognition of notable writings for children, many countries offer awards for children's literature. These include National Book Award for Young People's Literature and the Orbis Pictus Award for excellence in the writing of nonfiction for children in the United States, the Carnegie Medal for writing and the Kate Greenaway Medal for illustration, the Nestle Smarties Book Prize and the Guardian Award in the United Kingdom and Commonwealth, the Children’s Book Council of Australia book awards in Australia, the National Outstanding Children’s Literature Award in China and Governor General’s Literary Award for Children’s Literature and Illustration in Canada to name a few. International awards like Hans Christian Anderson Award, the Astrid Lindgren Memorial Award, Ilustrarte Bienale for illustration and Bologna Ragazzi Award for art work and design also exist as forms of global recognition.

Although Masood Barkati’s work for children is beyond any worldly award, official authorities need to take notice to get it recognised at least on a national level. Editing a children magazine for 65 years without a single break might be a world record in itself. If there is some governing body monitoring and awarding the children fiction writers, he must stand at top of that list by all means.

Still alive in my memories are those innocent days of my childhood when I along with my sister waited relentlessly for that thump on the floor of ‘Hamdard Naunehal’ being thrown over the gate by hawker on particular day of the month, the excitement followed by it and then the quarrel between us on who would read it first. How those stories, moral lessons, quotes, travelogues and style blended together to form amalgam of fantasy and ecstasy essential for character building was realized much later in our lives. Barkati sahib carried a mission in his pen and brain and he made sure the bits of that mission poured in our souls issue after issue of Naunehal.

I am not shy to say that he succeeded in his mission entirely at least in my case, where I got inspiration from his and Hakim sahib’s writings and tried to incorporate those moral teachings into my life. These served as minarets of light showing brightness and purposefulness in surfing ahead over tidy tortuous waves of life. I am also confident that this is not only mine story, but the story of hundreds of young Naunehals who are grown up now and serving in their own capacity towards betterment of society.